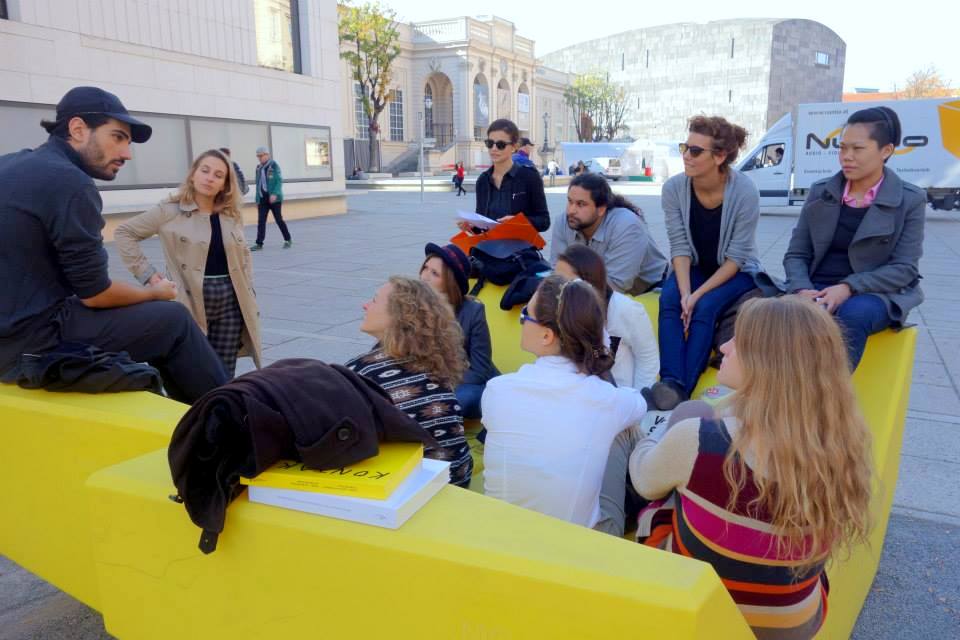 BLOCKFREI – an independent cultural organization – was founded in Vienna in May 2013 as a platform for multicultural projects and is aiming to promote contemporary cultural practices.

In Autumn 2013, the eight-week pilot-project CURATOR’S CONNECTION, a curators-in-residence programme, was organized by BLOCKFREI in a partnership with the Hungarian organization cARTc. During the 56 days of this programme, seven international emerging curators had a unique chance to explore and get to know in-depth the contemporary art scenes in Vienna and Budapest.

BLOCKFREI organized the first three weeks – which took place in Vienna – of this intensive programme. It included numerous meetings with head curators, representatives of leading contemporary art centers (such as MUMOK, 21er Haus, TBA21, Quartier 21 or Secession), thriving freelance curators,  private collection owners and representatives from artist-organized spaces and initiatives, as well as visits to artists’ studios. Furthermore, the participating curators were taking part in cultural management workshops, organized by the “Institut für Kulturkonzepte”, which were specifically arranged and adapted regarding the needs and purposes of the participants‘ individual curatorial practices.

The results were embodied in long-term collective and individual cooperation, as well as specific projects, such as curatorial collectives and blogs. The CURATOR’S CONNECTION was therefore successfully completed with mutual contentment of both, the participating curators and the other parties involved.

„After the two months curatorial residency, I have established a strong network both in Vienna and Budapest, and expanded my capacity as a curator. The programme has initiated good contacts with talented people who are dealing with real situations creatively. It is a motivating experience, whilst learning and executing critical contemporary art projects with my fellow 7x8curators colleagues.“

„The Curators Connection Residency provided an invaluable experience of the art scene in Vienna, which enhanced my knowledge of the active cultural landscape in Vienna, as well as expanded my professional networks to an international scale.“

„CC helped me bridge the gap between art show organizer and curator by examining the philosophies behind every exhibition. The hands-on approach to curating plus the experienced friendly staff created an environment right for learning.“

Due to the success of the 2013 pilot-project, BLOCKFREI was convinced to continue this year with a new edition – the CURATORS’ AGENDA 2014 programme, based on the Vienna part of the last year project.

The programme CURATORS’ AGENDA – C’A is designed for all emerging international curators or other professionals in the field of contemporary art, who seek practical knowledge in curating and want to explore the contemporary art scene in Vienna. The C’A programme will include talks, study trips and encounters with curators, cultural educators from leading institutions and self-organized art spaces, artists, freelance operators, as well as other entrepreneurs in the field of contemporary art which will reflect on their work and role as mediators between artist and audience in different contexts. Furthermore, the C’A curators will be provided with know-how modules and workshops related to exhibition management and production, with the possibility to execute one mutual project – a final group exhibition.

All applications consisting of CV up to one A4 page and motivation letter up to one A4 page should be sent not later than 1st of September 2014 to the address info@blockfrei.org. Costs of this programme are 1000 € and should be paid in advance, after the list of selected participants is announced, and not later than the 25th of September. Please note that accommodation, traveling costs and per diems are not included in the Price.